So just who are the Heralds of War?

Clint is our resident Podmaster and is in control of the mixing desk and editing software.

He’s been playing since 2000 and is a big fan of the undead. A hobby butterfly, Clint is known in the playing group for starting projects, getting distracted and selling the project again.

You can find the Rankings and Masters on this site. 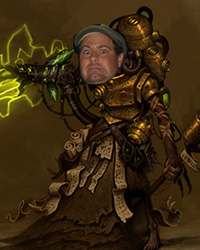 The king of filth himself, Luke is the competitive voice of the Heralds! As a longtime Skaven player since before the end of the Old World, he pushed around Skaven Skryre and Tzeentch, rising to be the top of the Australian Matched Play Rankings and staying there for the 2016-2017 season.
Not content to just beat his opponents on the table, he also makes sure his opponents have great games and has won several best sports awards the same time as he picks up his 1st place trophy.